The history of Paella

Paella’s story begins in Valencia and begins with rice.

1st to the XIIIth
The origin of rice in Spain

Rice farming is very old in Spain and its first settlements could be preceded by the arrival of the Arabs * in the 8th century.
But the most widespread theory holds that it begins rather with the Moorish invasion, in the years 711-732. The Arabs who conquered Valencia in the 8th century, did not know what rice was. This is one of the discoveries they will make in Iraq later and that they imported to Valencia during their occupation.
In any case, the rice hardly seems to have been cultivated before 1200 **, in the large rice growing area of Valencia.
Rice cultivation developed mainly after the Christian Reconquest (XIII century), which explains why the words of the culinary vocabulary based on rice are not Arabic. And even less Paella is a way of cooking rice that dates back to the 19th century.

XIII
The release of Valencia 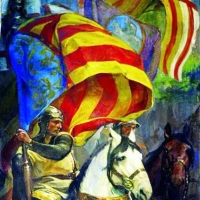 When James the Conqueror frees Valencia in 1238, rice is already present and it is cultivated around a lagoon at the gates of the city. The latter, behind the coastline, will be filled by the peasants and transformed largely in the rice field.
This enormous human work gave birth to the 20,000 hectares of rice fields of the Albufera, the word means pond in Arabic.
King James I will quickly dictate laws to limit the cultivation of rice around the Albufera and keep the risk of malaria out of the city’s gates. This seems to imply for rice growing a certain stamp of novelty.
It then becomes customary to prepare rice dishes in earthen dishes during family and religious celebrations. These rituals had a very strong traditional and symbolic character.
It was at this time that rice met with great success in the city, it represented an excessively profitable trade.

XIIIth to the XIXth
A saffron rice in earthen dishes

Over the years, rice has become the staple food of Valencians.
Around the rice fields where it is grown, we add products from the lagoon: eels and fish.
In the surrounding lands, vegetables, cold meats and meats.
But during this period, it is cooked in a dish of earth, in broth on fire or dry in the oven, but essentially at home.
It is at the beginning of the sixteenth century that we find the first written testimony of the use of saffron with rice.
Rupert de Nola, a court cook, writes in a recipe book that he uses it to give a beautiful orange-yellow color to one of his rice-based dishes. Its name: “Arròs en cassola al forn” that can be translated as: Pan of rice baked.
There is a good chance that it is the ancestor of baked rice, probably the most popular rice in Valencia. 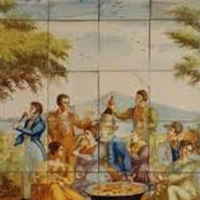 This dish of rice, cooked on Sundays or days of specific religious holidays and in this skillet without handle, becomes typical of the region of Valencia and is called then “Paella”.
It is as it expands beyond its borders that it takes its name “Paella Valenciana” of the dish in which it cooks the “paella” and its region of origin “Valencia”

The expansion of Paella beyond its borders was difficult.
This dish, known internationally, is not so much as couscous or pizza.
This for two reasons ***:

The migrations of the Valencians are recent: flight from the civil war to Algeria or the south of France. Then later: harvest in the Languedoc and rice work in the rice fields of the Camargue.
This is how Paella spread widely in France.
But it is with the beginning of tourism in Spain from the years 1960-70 that begins this diffusion on a large scale that we know today.
Spanish restaurants are developing in the European countries, and the big distribution is launched in the paellas all prepared, not to mention the dishes all made sold with the pan and recipes of paella with the pressure cooker or the microwaves.
With more or less happiness in his “interpretations”, but it is the lot of all dishes that are globalized.