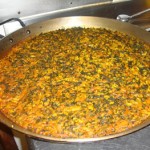 Called in Castilian “Paella de Verduras” or “Arroz en paella verde” but also “Paella Verde” : it is a paella with vegetables, most often (if not always) cooked without meat, or meat broth, a vegetarian paella somehow.
Forget as much as possible frozen vegetables ! Do with seasonal vegetables, even if you have to remove or add some from the list given below.
You want to succeed a tasty paella ? Two imperatives: freshness and quality!

History or anecdote of the vegetable paella :

Often called "Arròs de sabater" in Valencian and "Arroz de zapatero" in Spanish, which means "Rice of the shoemaker", this recipe is very typical of Alcoia.
The shoemakers were very poor, and the only thing they could afford to cook their rice was vegetables.

Variant of the vegetable paella :

Other vegetables also used according to families or region :

Pay attention to vegetables which lose water, this change the volume of your broth, in order to succeed the rice cooking...